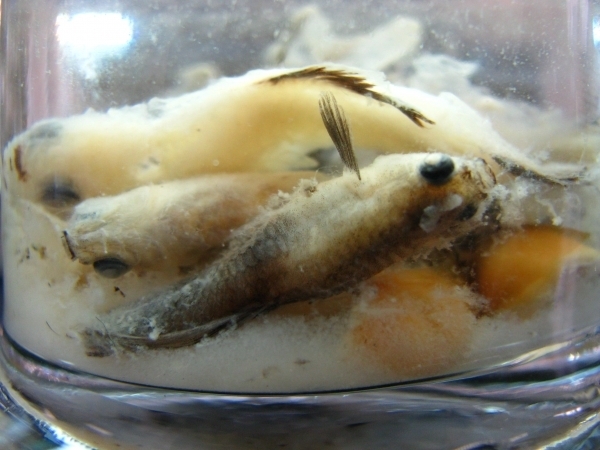 < Back to Topic
Rating:
+ Show All Tags + Hide All Tags
More

Other Photos of Topic Fungal-like organisms 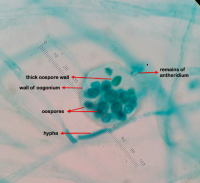 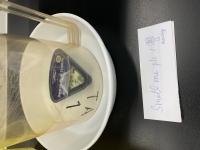 yes, they have a cellulose cell wall, unlike fungi. they are opportunistic pathogens that's why they infect fishes in this specimen.
by LEE_TomChunWa (Student) at 2019-11-02 22:55:00

This is a fungi-like organism called Saprolegnia, which is under the phylum oomycota. It can reproduce both sexually and asexually. For asexual reproduction, it produce motile zoospores, which contain two flagella. For sexual reproduction, it from oogonia and antheridia on the same hypha. They produce haploid eggs and haploid male nuclei respectively through meiosis. The antheridia develops fertilization tubes to penetrate the oogonia, in order to fertilize the eggs. A thick-walled zygote named oospore is formed from the development of fertilized egg. Saprolegnia not only grow on dead animals and plants, they also grow on live fish. Species like Saprolegnia parasitica is a infamous pathogen to fish hatcheries and aquarium hobby. I got a female Ruby Red Peacock Cichlid (Aulonocara rubescens) in the past. She is infected with Saprolegnia. I hesitated at first and isolated her 2 days after showing sign of infection by Saprolegnia, which is like a fluffy cotton balls on the body. I then isolated her in a hospital tank and treated her with methyl blue, which is a common fish medicine. I also added some salt to reduce osmoregulatory stress of the fish. Unfortunately, she passed away around 5 days later. After that incident, I decided to swiped the medicine to a Seachem product called ParaGuard, which is a synergistic blend of aldehydes, malachite green, and fish protective polymers, to treat my whole fish tank. It successfully cure other slight infection of other fish. I am not sure the Saprolegnia that I have encountered is a opportunistic organism or a pathogen. Since the water quality of my fish tank are decent, and fish occasionally fight each other which is a common behavior for cichlids. And there is also a tiny outbreak of Saprolegnia in my fish tank which result into a few sick fish, including the stronger one. I think that Saprolegnia that I encountered is more likely to be a pathogen. In order to avoid situation like that, I would suggest every fish keeper to isolate newly brought fish for at least 30 days in an isolated tank, to observe its behavior and whether it develop any sign of infection, like fluffy cotton balls on the body which is a sign for Saprolegnia infection. If so, treat it until all symptom of infection is clear before adding the fish in your fish tank. This avoid the transmission of disease from your newly brought fish to your old fish. Also, avoid adding any water from fish store directly into your fish tank, that could induce pathogen to your fish tank too. Last but not least, always treat your sick fish as soon as possible with the suitable medicine. I would also like to raise a question about how Saprolegnia end up in our fish tank. The first theory is that Saprolegnia always present in our fish tank, maybe it is come from our tap water, but if the fish are in good health, they can't be infected. The second theory is that Saprolegnia is introduced by sick fish or contaminated water from fish store. Which of the theory is more likely to be the case of aquarium fish infection by Saprolegnia?
by Li Ming Chun (Student) at 2020-10-06 17:28:45

Ming Chun: thanks for your experience sharing and advice. Hope your fish won't be affected by Saprolegnia again.
by Cherry_Chow (Teacher) at 2020-12-10 20:02:18